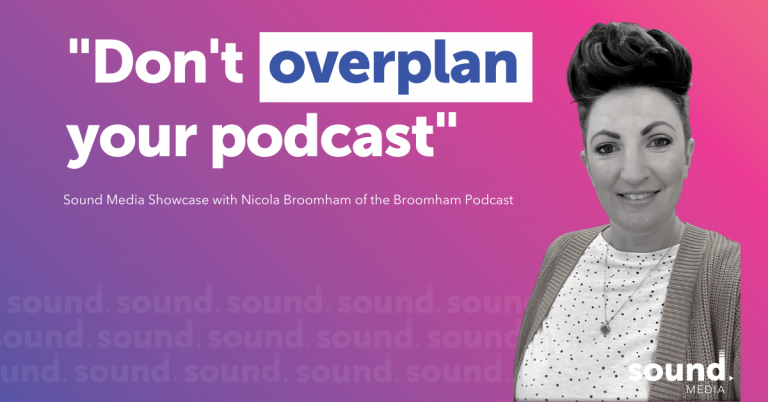 Failure to prepare is preparing to fail, or however the saying goes.

And it is quite true. I’m from a radio background where ‘prep prep prep’ is something of a mantra.

But Nicola Broomham, host of the Broomham Podcast, makes an excellent point: you can prepare TOO much.

In the first Sound Media Showcase, Nicola’s tip is to allow some of your recording to maintain an organic sound.

It follows her own experience of a recording session recently.

“Don’t talk about it too much before you go on air. I had this with a podcast last week where we were talking about quite a controversial and emotive issue and I just really wanted to get their background on why they wanted to talk about this and why it was important to them.

“Before I knew it we were kind of 10 minutes-plus into this chat and I was thinking to myself I really should have hit record from the off but I didn’t.

“So then I had to almost go back and get them to tell me everything again and it didn’t have that natural passion and flow and feel to it that it had in that first bit – it almost felt a little bit staged.

“So I guess the thing that I’ve learned quite quickly is don’t prep TOO much.

“You need to prep and you need to know where it’s going to go and ultimately what you want to achieve out of that podcast, but don’t overplan.”

These are wise words.

As I said to Nicola during the Showcase, I have a similar sort of thing with one of the podcasts I’m on where we have coined the phrase ‘save it for the pod’ to try to stop us having all the juicy conversations before we’re recording.

There is a magical point somewhere in the middle where – as Nicola says – you have a plan of where you want the recording to go and an idea of what you’re going to ask, but it isn’t set in stone before you even start.

I liken a lot of things in podcasting and broadcasting to going to the pub with your mate. Essentially, the theory is the same – it’s having a conversation, just in a different environment.

You might go to meet a pal with a couple of things in mind you know you’re going to ask them about, but you don’t have the entire conversation mapped out word for word.

A key podcasting tip I’ve learned over the years is to always have SOME questions prepared, but be ready to drop them and follow whatever direction the recording goes in.

So why is it so important to have any prepared at all, then? Well you need to be able to concentrate fully on what your guest is saying. so If you’re busy panicking about what to ask next, you might miss something they say. But if you know you have your ‘planned’ question sat there, you can give them your full attention, and things can naturally go off in whatever direction.

Nicola is fairly new to the podcasting game, but really has taken to it like a duck to water. Have a watch of the Showcase to find out more about her brilliant podcast, which tackles some tough issues, making for some difficult – but important listening at times.

Nicola had some incredibly kind words about how Sound Media have helped on her podcasting journey so far.

“You’ve helped me set this up from the beginning – I’ve never done a podcast, never recorded any kind of audio really so my knowledge of podcasts going into this was actually pretty small to be honest.

“I really felt that you held my hand through all that onboarding, helping me choose the music and explaining how it was going to work – showing me all the back end of podcasting and understanding the analytics and things like that.

“I’ve had a couple of episodes which I needed a really quick turnaround on, and you were there, you were on it. You’ve been really organised with communicating – I love your little (What’sApp) voicenotes!

“You’ve been great and the editing has been fantastic.”

It’s a real pleasure to work with Nicola and I can’t wait to see her podcast continue to grow in the coming weeks, months and years. It is already making an impact, and she’s only just getting started!

If you’d like to chat about how Sound Media can help you, wherever you are on your podcasting journey, get in touch and let’s chat.