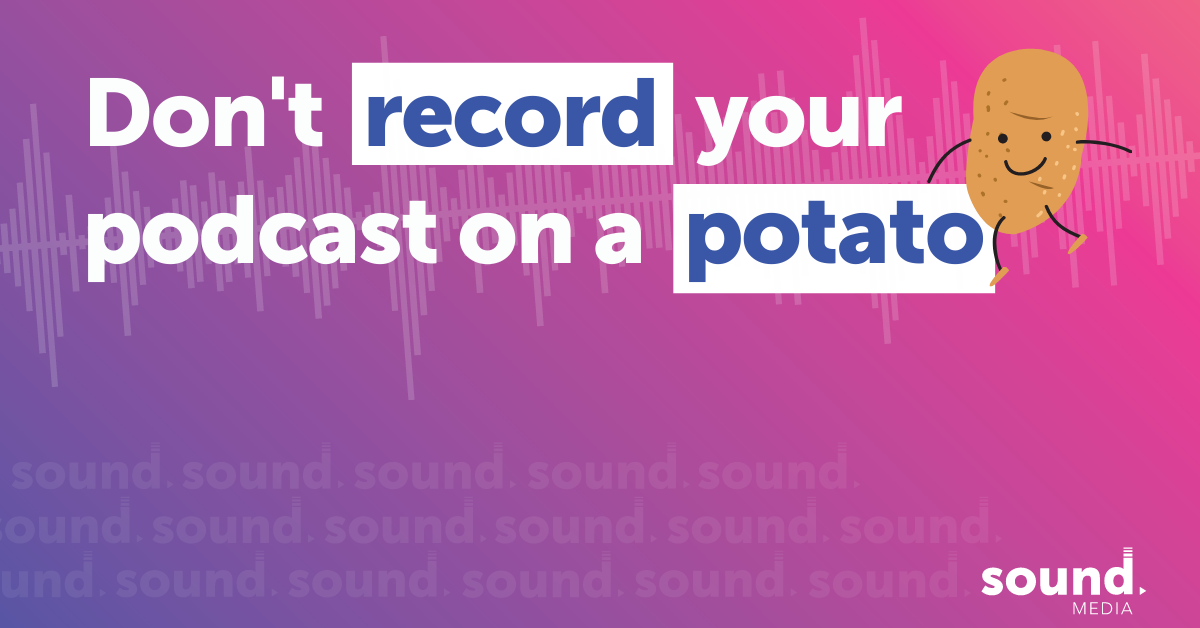 Don’t record your podcast on a potato

Posted at h in Uncategorized by
4 Likes

OK ok, so no-one ACTUALLY records their podcast on a potato (although I used to work with an engineer who would probably tell us that it’s possible).

Thing is though, I still hear podcasts that sound like they could be. The sound quality is all over the place. And – being human – I make a bit of a judgement in my mind about that show, and subsequently the brand it represents, as a result.

Maybe I’m not a ‘typical’ listener. I come from an audio background and to give you one of several examples, many years ago made myself quite an unpopular news editor at the radio station I was working at by banning journalists from doing interviews over the phone. The quality just wasn’t good enough.

I realise podcasters aren’t recording their shows on a telephone line. Zoom is now king, and I’d guess the majority of remote podcasts are done that way (just for info, I’m only concentrating on remote recordings in this piece, not IRL, and I’m accounting for some people wanting to capture the video as well as audio).

Look, this isn’t me having a pop at Zoom. Far from it. I love Zoom and it’s been at the heart of both my work and social life for over a year now. I was a Zoom user for years before the pandemic too. It’s fantastic.

But I don’t think it’s a particularly great way of recording a quality podcast. The problem with things like Zoom – and similar applications like Teams – is the reliance on internet connections. If you have a glitch, the audio recorded will too. If it freezes for a moment, then the speaker’s voice goes double speed to catch up, your recording will have that too.

I was at a virtual podcasters’ meet-up during the week (shout out to the excellent MICs Podcast Club) and there was quite a bit of talk of workarounds to get the best from Zoom, which I found really interesting.

I get that it’s a really simple solution (everyone knows how to use Zoom now, hey?) and of course it’s very cost-effective, but I very rarely record my podcasts on Zoom and if budget allows, I’ll always recommend to clients that they don’t either.

Why? Because there are solutions out there which give you better quality recordings. And if your aim is to truly make an impact with your podcast and be considered in that ‘top end’ of shows, you need to be better than a VOIP recording.

If your show is genuinely just for fun or a pure passion project, maybe this doesn’t apply to you. But most podcasters I come across now want it to be more than that. They want their podcast to become a brand, or it might be part of an existing one. They see it as a business vehicle, or perhaps something they want to monetise somewhere along the line.

Podcasting is a competitive world these days. You’ve more than two million shows you’re pitching against. You need to be better than the others and sound quality is the first step in achieving that.

In my eyes (erm, ears), there are actually four main ‘prongs’ to getting the best quality sound for your podcast. I’m only considering one here but it’s worth a mention for the other three as well:

– The quality of your mic

As I say, I’m skipping over the other three for now but will come back to them in future articles. For now let’s focus entirely on recording platform.

I use two main platforms for almost all my podcast recording, and for remote production work.

They both work in the same way – by recording each person locally on their computer and then uploading the audio/video afterwards, thus sidestepping the internet glitching issue entirely.

Squadcast.fm* is just brilliant. It works. It does what you want it to do. It’s reliable, it’s extremely well built. It has never let me down. The support team are fantastic and super responsive, and they really understand podcasting. Honestly, I don’t really have a bad word to say about Squadcast. Recently it’s added video capture on top of audio capture, allowing you to get an HD video file for each participant.

One downside here though is cost. Although it’s not going to break the bank, it could easily end up being your highest monthly podcast outgoing.

One other small drawback is that Squadcast is limited to four participants on a recording, and doesn’t have any sort of mobile or tablet capabilities.

It doesn’t try to be too clever – Squadcast is a pure recording platform. And it does it extremely well.

The new contender on the scene is Riverside.fm*. It essentially does the same job as Squadcast but is a bit cheaper. It allows up to eight participants and has a mobile app too.

I’ve been using Riverside alongside Squadcast for a few months now and really like its interface and features. I don’t have the same long history with it that I do with Squadcast, but it has become a regular part of my podcast armoury.

Riverside has a ‘producer’ mode, where someone has access to all the controls on each guest, but doesn’t get recorded. That’s quite neat. I haven’t tried either of these yet but you can also create an ‘audience’ link so fans can sit in on the recording (and you can invite them ‘on-air’ to ask a question) and you can hook it up to stuff like Facebook Live to broadcast your recording as it happens. Some really clever stuff.

They aren’t the only two recording solutions. There are many others – some I’ve used and had bad experiences with, some I just haven’t had chance to test out yet.

Here’s a really important point regardless of what platform you opt for: use headphones, and make sure your guests do too. The alternative is a speaker of some sort and that combined with a microphone equals echo and other sound problems. Trust me on this, make sure every participant uses headphones.

If you’re just starting out in podcasting, or you’ve been doing it a while and realise now is the time to step up a level, Sound Media can help you achieve the best quality sound (I mean, it’s literally in our name!) so that you’re one of those making impact out there.

For a free, no obligation, discovery call with me personally, just book a time here, and let’s chat

* This is an affiliate link meaning if you sign up via it, I get a small kickback. I like to be open and honest about it. It doesn’t in any way influence my words or recommendation – I’m a Yorkshire lad and we’re brought up to be as honest as the day is long.