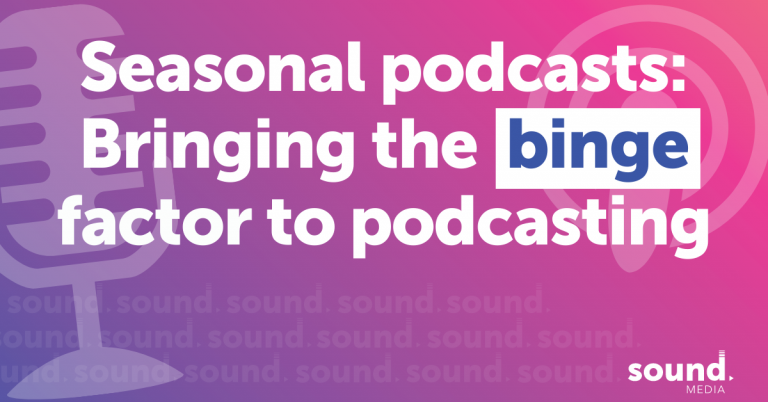 Last week, I was helping to guide someone through planning out the strategy for their podcast.

The usual question came up of how regularly they’ll be publishing episodes. I always tell people that weekly and monthly are the easiest – or, probably accurately, the simplest to get across to your audience. ‘Every Wednesday’ is much neater than ‘every other Tuesday’.

Recently we have seen more of a shift towards podcasts split into seasons – enabling creators to take a bit of a break or change focus – but still following the sort of release schedule mentioned above.

One of the things that doesn’t get so much consideration is what I loosely refer to the ‘Netflix option’. The binge factor: record say six episodes, release them all at the same time.

That’s the format I suggested to my client last week… and they loved it.

It really suited the style of their show, but also, importantly, suited their circumstances. There were concerns that recording weekly might become unmanageable but monthly felt too infrequent. Block releasing still gives them the freedom to promote the episodes on a schedule that suits them (say one a week) but has the advantage that when a listener discovers an episode, the others are already there waiting for them. They can binge on them in the way we all do so much now with TV box sets.

A big positive is that it avoids any part of the project becoming overwhelming. You have time in between seasons to rock on with organising and recording episodes and set your next season release date when you’re ready. It gives you maximum control in terms of time, which of course is often the most valuable commodity.

It’s a good fit if you’re a little tentative about making a step into podcasting, too. Total control and minimum commitment.

If you have a great idea for a podcast but no idea whether it should be weekly, monthly, seasonal, or even where to start, drop me a line and let’s fix up a (free!) chat about it.