Five steps to create your own podcast tribe 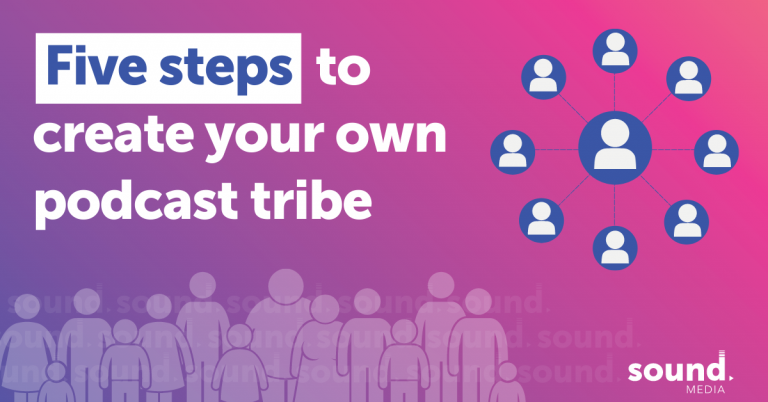 Don’t worry if you read the headline and didn’t really know what a podcast tribe is. Most podcasters probably don’t.

Allow me to explain. Your tribe is made of those listeners who are the full-on cheerleaders for your show. They’re not the passive listeners who tune in to every episode you do – although they’re equally valuable. They’re the ones who interact, who spread the word, whose name you see popping up on social media and email all the time. They make up your tribe.

We had a fantastic chat on Pod Almighty recently with Charles Commins, a podcaster and producer who co-runs a meet-up group for follow creators. Have a listen here and the video version is at the bottom of the page

After reflecting on what we discussed in the episode, I’ve put together a five step plan for you to follow.

Pretty simple, but dead important. Step one in creating a tribe is to actually understand what it means. You can’t create one without that understanding – once you’ve cracked that, then you can start figuring it all out. Don’t be tempted to skip over the learning part.

Hopefully you’ve listened to the episode and so you’ve already smashed this step!

Onto step two, finding your tribe. This is probably the biggest step.

If you’ve been podcasting for a while, there’s a chance you already have a one. You may well know some of the people in it – and some of them might even know each other. There’s nothing to formally bring them together, but the foundations might already be in place.

But here’s a really key point – you probably won’t know a big chunk of them. Some of your biggest cheerleaders might never interact with you on social media; in fact they might not even be on social media.

It’s a reminder to all of us – the world doesn’t revolve around social media, and neither should our podcasts. It’s a great tool for promoting shows, finding new listeners, communicating with listeners and getting feedback, all of that. But it isn’t the be all and end all.

We had a really good discussion about this on the show. Both Charles and myself do football (soccer) podcasts about separate but equally average teams, and we both ventured into listener clubs of some description. Charles used Patreon, the more usual route, while I went with a Paypal model. We asked listeners to ‘sign up’ as kind of superfans… or to bring it full circle, what we were really asking them to do was to join our tribe.

Both Charles and I saw names signing up we didn’t recognise. Several people who had never interacted with the show before, but felt so strongly about supporting what we do that they were willing to put money our way.

Now building a tribe isn’t necessarily about asking people for money, but I hope you see the point I’m getting at – you might not know some of… half of… or maybe even most of your podcast tribe.

Another example here is email lists. I’m willing to bet that any podcaster who has decided to set up an email list for their show has been surprised at some of the people who sign up. There will be names they don’t recognise and probably a much bigger geographical reach than they’d expected.

Step Three – Bring Them Together

Once you have identified them, step three is to actually bring them together.

We’ve already talked about some of the ways you might do that above, such as patreon or an email list. You might just set up a Facebook group, or a Slack channel, or some kind of forum. You might get them together for drinks in person, or host an event.

Step Four – Put Your Tribe To Use

Once you have them together, be it virtually or physically, step four is use your tribe effectively.

Remember, they’re your cheerleaders and they can help you grow the show. Not just in terms of listeners either – you now have a market research panel who you can turn to for help developing the podcast or running feature ideas past.

Your tribe should never become a static club – it should always be growing and developing. The final step is one you’ll never really put to bed.

How you go about growing it really depends on how you’ve tackled all the above steps. You might advertise your Patreon or email list publically on your show, for example, but maybe how you’ve set up your tribe is more suited to keep things a little more exclusive or discrete.

But remember, how you identified your tribe originally isn’t just a one time process… new people will come along who you’ll want to get in there too.