How to be a great podcast interviewer 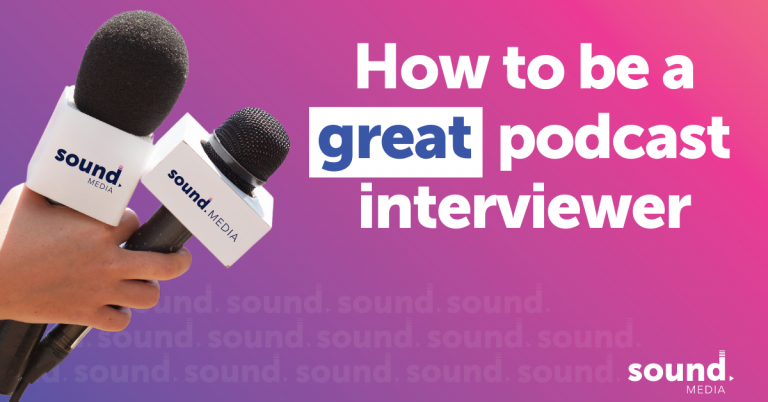 Making the decision to start a podcast is quite a landmark – but ultimately, that’s where the real work starts.

The most popular kind of podcast is an interview-based show, and with good reason.

To name just a few benefits: They’re interesting for listeners, less pressure on you as the host, you get double the publicity for the episode if your guest shares it with their audience, and it’s a really neat way of getting a foot in the door with people you’d like to get to know.

But conducting an interview is daunting, especially the first time.

Here I share a few simple tips and tricks to help you prepare for that first interview.

One of the most overlooked tools at our disposal – give yourself a free hit. Do a ‘pretend’ interview – with your other half, a friend, a colleague, family member – anyone! The idea is that no-one else will ever hear the recording – it’s just to give you a chance to try it out.

You’ll get a few things wrong, and realise one or two of your questions aren’t as good as you thought – but it’s so much better to do that in a pilot recording than on the real thing. You’ll learn so much when you listen back to it.

I recently added a pilot episode into my business packages – so I actually do the recording with clients, whereas before it was just something I advised them to do. It really is that useful.

It’s really worthwhile having an information sheet that you send out to guests. Create a template and just update it for each one.

Include information about how you record – that platform you use, and any instructions they will need.

Also include some best practice, so pointers like always wearing headphones, recording in a small quiet room, use a mic if they have one (you’ll find loads more in this episode of Pod Almighty)

Critically, I wouldn’t send them a full list of questions. You don’t want your guest to OVER prepare, as they’re liable to end up sounding like they’re reading from a script.

But it’s good to maybe give them an outline: ‘I’ll be asking a bit about your career, what you’re up to these days, and your thoughts on how the industry has changed’ for exemple.

An exception to this is if you ask a really, specific, specialist or unusual question – then it often is best to tell them in advance, so they have time to think. Some examples of this are:

They’re actually all examples from podcasts I produce. These are all questions which are tricky to answer on the spot, so giving your guest advance warning means you’ll probably get a better answer.

I get bored of myself going on and on at people about the power of prep (prep being short for preparation). Failure to prepare is preparing to… blah blah.

But it’s so true.

There’s a temptation for new podcasters to take an approach of not really doing any prep – the ‘organic’ route. “I’ll just make it up as I go along”. I do get this – especially when time is tight.

My obsession with prep goes back to my years working in radio. I could spot a mile off the presenters who had prepped their shows properly to those that hadn’t. They knew where they were going with their talky bits, and that made it so much easier to consume as a listener.

Podcasting isn’t radio, nor should it be. Every podcast doesn’t have to be super slick and smooth. But what about yours? If you’re reading this, that tells me you give a sh*t. You want to do things right. So yours, yours DOES need to be slick.

How does this apply to an interview show? Three things really.

That doesn’t mean scripting it out word for word – you could just make bullet points. But know what you want to get in there and give the guest an appropriate set up. Don’t just say ‘today’s guest is Joe Bloggs; Joe, introduce yourself’. It’s a bit lazy and it’s a little uncomfortable for the guest. Human nature is we aren’t all that good at bigging ourselves up, so it falls on you to do that in your intro.

Yes, you should prepare some questions in advance. This is mega important. Of course, it is a conversation, and as such it could go in any direction, and that’s fine. But preparing questions actually means there’s a better chance of the conversation going off on an organic tangent. Why? Because it means you can LISTEN.

Let’s say you have ten questions prepared. You ask the first question. You don’t need to worry about what you’re asking next, because it’s right in front of you. So you can give your complete attention to what your guest is saying. If you pick up on something they say, you can probe away.

In fact, it’s absolutely fine to prepare ten questions and then only ask the first one. The rest can come entirely from what your guest says.

But if you don’t have them prepared, you’re going to spend your time panicking about what to ask next. You won’t be listening properly, and you’re liable to miss some golden moments.

How are you going to end the interview? It can sound really quite clumsy when it’s just two people saying ‘thanks, bye, thank you, take care, you too’ over the top of each other. So like the intro, prepare what you want to get across and if you’re going to give an opportunity for your guest to say goodbye, work that in too. I would say that the final word should be yours, and should probably be a simple, clear, call-to-action for what you want listeners to do next – go to your website, sign up for your newsletter, follow you on a social platform – take your pick.

This really bugs me when I’m listening to an interview show – hosts that consistently interrupt their guests.

We’ve all had those nights in the pub with that one friend who ALWAYS has to be centre of the conversation. In your head you’re screaming at them ‘just let someone else speak FFS!’.

It’s a similar situation with a podcast guest. Give them plenty of room. They are the star – so let them speak.

That’s not to say that you can’t throw in your own opinions, or your own stories. But don’t interrupt – if needs be, keep a notepad with you and jot down points you want to make, which you can then pick up with when your guest has finished speaking.

This is most relevant at the start of the episode. It may be that once you really get into things, it becomes more of a chat, and that’s great. Then it can be more of a two way conversation. It’ll find that point naturally – don’t force it.

A great skill I picked up from radio interviews is the power of nodding. It’s tempting to ‘mmm’ or ‘oh yeah’ through your guest’s responses – but it’s better to nod. That gives your guest the reinforcement of knowing you and listening but without the interruptions.

Interviewing is a skill and it does take time to get really good at it. Watch your favourite talk show hosts on the telly and see how they manage to put guests at ease, let them be the star, but also throw in their own funny stories and moments, and you’ll start to appreciate what an art-form it really is!

But like anything, practice makes perfect. The more interviews you do, the better you will get. One thing you can do to speed up that process is to evaluate.

I call this feedback or airchecking. Quite simply, it’s listening back to your episodes and honestly reviewing yourself. Three simple sections: What went well, what didn’t quite work as well, and some action points to set for your next interview. That’s it.

You can do it yourself, or get other people involved. Maybe get some professional feedback (airchecking is a service we offer at Sound Media for example).

What’s surprisingly useful is the feedback from a listener, if the opportunity arises. I stop short of creating listener surveys or similar, but if you find yourself in the company of one, then ask them to give you their honest thoughts. It might just surprise you!