How to use audio in your social media 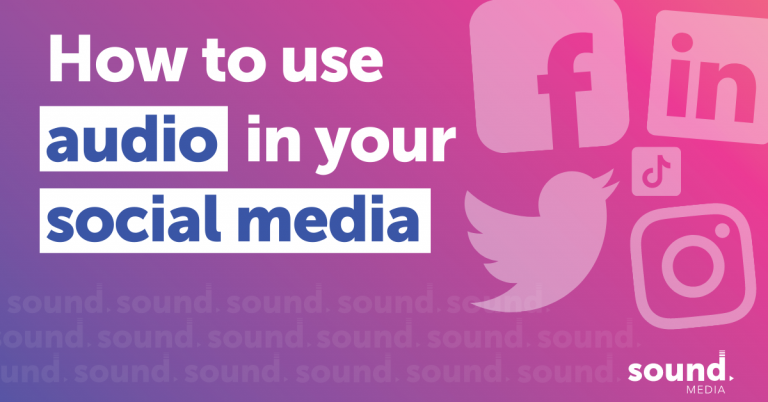 Got a nice blog to promote? Just share the link. Done a really good video? Go ahead and upload it. Taken a great photo and designed a killer image on Canva? Easy, couple of clicks and it’s on your feed.

But what about this mp3 clip from my podcast? How can I easily pop this on my social media?

There’s never been a really simple solution. And it’s annoying because so many podcasters rely on social platforms as a key part of their promotional efforts.

Maybe one day it’ll change and they’ll bring in some way we can easily share clips – I have seen a lot of rumours over the last few years, none of which seems to have materialised. Yet, anyway.

So in this blog, I wanted to go through some of the ways that you CAN effectively use audio in social media.

1. Links to your episodes

This is the blindingly obvious one – although to be fair, not all links are equal, so for all podcasters it’s worth taking the time to pause for a moment and consider how you do this.

When you share an episode, you probably use wording like ‘in your favourite podcast app’ – and that’s fine, although potentially unnecessary as these are words aimed at existing podcast users who don’t need to be told them.

So we should be including something else – a simple, clickable link, for someone who is new to your podcast, or new to podcast listening entirely, or isn’t interested in going off searching for something in an app.

The most obvious thing is a link to your website, if you have episodes there. A lot of podcast hosts include a basic ‘podcast website’ in their package, so this makes that quite straightforward. Example: https://www.podalmighty.co.uk/episode/creating-a-perfect-podcast-trailer

Some hosts will give you links specially curated for social media, which just bring up the episode player. They’re quicker to load, more convenient for the user, and often much easier for someone on a mobile device. Example: https://player.captivate.fm/episode/27464a26-b006-4cfc-b18b-652afeb85b44

I’ve seen people post links to their show in Apple Podcasts and I’m not a huge fan of this. It is still very iPhone specific, which isn’t much use to Android or desktop users.

You could share a link to your show in an app which spans different devices and operating systems though. One example is Spotify which will work on any smartphone or computer. Example: https://open.spotify.com/episode/546bHon5GS2l17ixezkYKk?si=shEhlSJxTn23YGC5-Y0EWw. Or something like Goodpods. Example: https://goodpods.app.link/5XZxPGNvNlb

Another route to consider is a third-party service which creates a ‘magic’ link. This link will send people to different apps depending what device they’re on. The one I tend to use is Podfollow. Example: https://pod.fo/e/fcfe3. If you click on that link on an iPhone it’ll take you to Apple Podcasts; on an Android device it’ll go to Spotify; on a computer it will load up our podcast website.

An audiogram is a short excerpt from a podcast episode which is turned into a video so it can be uploaded and used on social media.

They were first invented for Instagram, hence the name, but are now used right across every social platform.

Audiograms aren’t videos in the traditional sense of the word. You don’t need to film your podcast recording session or anything. Audiograms use a static image or photo as the background and apply a moving waveform or similar graphic which runs in time with the audio clip.

Some people include subtitles too, but that’s optional.

They’re super easy to make although I reckon they are worth a bit of time to make sure they’re spot on.

You’ll likely have seen an audiogram, even if you didn’t realise it.

Here’s an example of an audiogram I posted to my Twitter:

What's happened with #swfc's trip to Portsmouth is bang out of order. Totally unfair on fans and frankly it shouldn't be allowed. Someone, somewhere, is an idiot.

Clip from this week's @DomAndJames podcast.

Proper videos are great tools to get your show onto social media. Where an audiogram is easy, pulling out video clips is a bit trickier.

For one, you need to actually record the video. If you’re doing your podcast remotely, that’s fairly straightforward, but much more complex if you’re recording in-person with multiple people.

Here’s an example where we used a clip from a remote episode recording:

Have you ever recorded a podcast… in the car?!

A brilliant moment from @MrChrisDevon on the latest Pod Almighty – all about building a home studio.

Loads of great tips and ideas, regardless of how much space you have.

Now, it’s really important to add that if you DON’T record your episode recording, that doesn’t then mean that videos are ruled out for you completely.

You could record an entirely separate video selfie talking about the episode and upload that, or maybe get your guest to do it.

Picture something like this: “Hi there, Joe Bloggs here, and on this week’s episode of Generic Podcast I’ll be telling you about how I built a million pound business in just six days – and why an encounter with a sheep meant that it nearly didn’t happen at all”

Who wouldn’t want to listen to that episode?!

Facebook seem to want in on the podcasting action. They’ve announced quite a bit over the last year or two about adding new features in to help podcasters and that’s likely to continue. At the moment, it’s quite country specific. I’m in the UK where we don’t really have any of the podcast features, but in some regions you can include a ‘Podcast’ tab with your latest episodes on your ‘page’ and – I believe – share specific clips from within episodes. Once this rolls out, I’ll update this. For now, I’d describe it as ‘one to watch’.

Not many know this – or at least use it – this Twitter allows you to ‘record’ attachments to your tweets. You can’t attach a pre-saved bit of audio – it has to be what you say directly into your device, so in some ways a variation on the idea in point 4 for recording videos to promote your episodes, but just audio without the video.

It’s officially still in the testing phase, although it’s been around for well over a year now. You can only record using an iPhone, but you can listen on any device.

Think of it perhaps as the Twitter equivalent of sending a voice note on WhatsApp instead of typing it out.

It doesn’t seem to be all that widely used at the moment, but it’s there.

To try out Voice, just tap the ‘new tweet’ icon and then the button with the purple soundwave lines – remember, iOS only, for now.

The other interesting thing is the rollout of Twitter Spaces. This is where you can host or attend audio ‘rooms’ discussing a particular subject.

If you are aware of Clubhouse then you’ll be familiar with the concept. I’ve decided to mention Twitter Spaces in this blog rather than Clubhouse as I feel in time, it’ll be the more useful tool for us as podcasters.

We’re talking about something that’s still quite new, but is starting to come into its own. One of my shows has started doing Twitter Spaces as follow-ons from episodes, where regular listeners actually have the chance to get involved, interact, ask questions, put their opinions forward etc.

It’s just audio based – no video – so the bar to getting people involved is lower. If you have an existing audience and following on Twitter, this is definitely something to try out.

Clubhouse is very much still there as well, as an alternative.

So there you have six ways of incorporating audio into your social media. Think there’s something else I should have included here, or want to chat about any of this blog? Just book a call straight into my diary