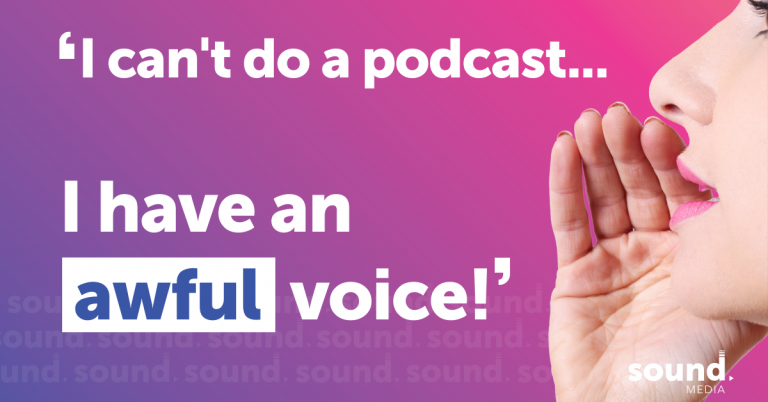 Seriously, I think pretty much everyone goes through this at the start of their broadcasting / podcasting journey.

That’s not to dismiss it as a concern though. It’s a major barrier, and getting over it is a challenge.

Unfortunately, there’s no quick-fix solution. You can’t flick a switch and suddenly fall in love with your own voice. Nor can you drink a magic potion to transform it to sound like someone else.

Your voice is your voice.

But herein lies the good news: your voice is absolutely not as awful, horrendous, terrible, or unlistenable as you think it is. In fact, your voice is probably absolutely fine, at the very least.

And for just about everyone, you can learn techniques to train your voice to smooth over any rough edges. There’s no shame in that. Everybody you hear on the radio or on the TV will have had some voice coaching. The best will have it regularly, even now.

By the way: having an accent is not a big deal. The world has changed. Stick BBC news on (or just about any TV or radio show at all to be honest) and you’ll find a broadcaster / presenter with a regional twang. No-one should let an accent hold them back because sure as hell your audience won’t care.

On that note, please don’t be tempted to put on a silly voice. It’s really dated. People like you for you – don’t pretend you’re someone else.

This whole subject is one that came up on our recent Pod Almighty episode, which focused on making the most of your voice, with our guest Ian Brannan who’s a radio presenter and award-winning voiceover artist as well as a podcaster. Check out the episode here or watch the video at the bottom of the post.

On the episode, Ian said: “It’s the first thing everybody says: ‘I hate the sound of my voice’. It’s because we’re not used to hearing ourselves.

“You’ve just got to get used to it. I guarantee you that your voice is fine; everybody’s voice is fine. I’ve never heard that many people who have a voice which is horrific. Usually it’s just people talk too fast, they’re too breathy, too monotone, or they mumble into the mic. It’s all things that can be learned.

“Make friends with your voice. Your voice is fine. It’s usually how you use your voice that you need to tweak.”

It’s a subject I’ve long been passionate about. ‘I hate my voice’ is something I hear all the time, especially from people on the cusp of getting started as a podcaster.

I realise it is a hurdle and you need to clear it, but it’s especially frustrating as because in reality, it doesn’t really matter.

No one chooses to listen to a podcast purely because they really like the person’s voice. That would be nuts. We live in a world where content is king, and that overrides everything else.

This is what I had to say on the Pod Almighty episode: “If someone chooses to listen to your podcast it’s not because you’ve got a great voice – it’s because they’re interested in the subject. They want to hear what you have to say on something.

“You’ve just got to get over it because chances are other people will not think your voice is anything like as bad as you do.”

There are two main steps for you here.

Step 1 is to realise that it’s WHAT you say that people will judge. So if someone has the nicest voice in the world but talks a load of rubbish, chances are they won’t build much of an audience.

Step 2 is to get used to hearing your own voice. Listen back to yourself. If you’re not already podcasting but want to, then record some pilot or dummy episodes. No one else needs to hear them, but listening to them yourself will help you get used to – and make peace with – the sound of voice. In time you’ll then be able to spot the areas where you can tweak and improve your vocal style, like the pace and pitch.

(By the way, step 2 should never stop, even for the most experienced podcaster. We should always be listening back to ourselves, and spotting the areas we can improve and develop our sound.)

Remember, you’re not alone. Everyone goes through this… and everyone gets over it.

Need some help? If you want some input on your pilot recordings, or if you’re an existing podcaster and the time is right to review your content and voice technique, drop us a line and we’ll sort you out!