LinkedIn for podcasters: how to use it properly 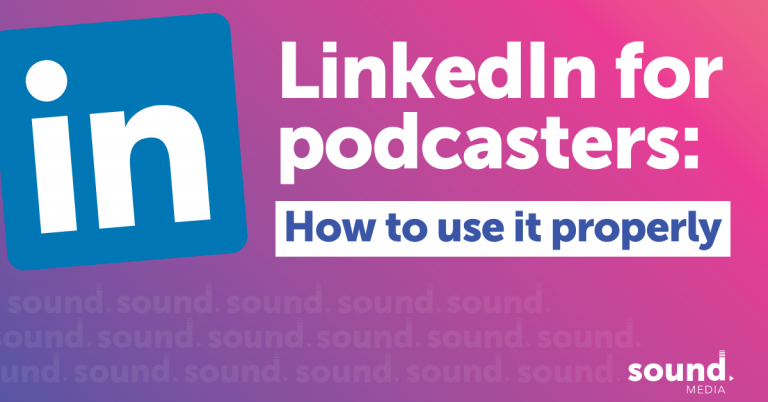 LinkedIn’s truly like marmite isn’t it? Some people love it; others can’t stand it.

I’m in the former camp, although I haven’t always been. Until I went self-employed, I was a very passive LinkedIn user. I didn’t really understand it. But once I spent some time getting to grips with it, that all changed.

LinkedIn’s awesome. It’s so specific. Facebook’s great for pictures of dogs; Twitter’s a brilliant combination of news, politics, football and beer (well, mine is anyway – come say hi if you’re a Twitter user); Instagram’s amazing for products and food; but LinkedIn is really focused around business and development.

To set the scene for this blog – episode one of the new podcast I’ve launched with a couple of other content creators is all about LinkedIn. The podcast is called Content 360 and here’s a link to the episode:

So that brings us to the question of LinkedIn and podcasts. And it’s not the more straightforward of questions.

You see it’s clear how other platforms work for promoting shows. Facebook groups are a good place to build a community, or a page which your listeners can follow. On Twitter, hashtags help you get seen, and the immediacy of the platform makes it brilliant for interaction. Instagram’s perfect for video highlight clips and ‘quote’ images from your episodes. Where does LinkedIn fit in?

The answer lies really in what we were saying before. It’s a specific platform, and so it works for a specific kind of show.

And actually, this is a process every podcast needs to go through to figure out the best platform to use. There’s not usually much to be gained from trying to spread your promotional work across EVERY platform – instead, focus on one or two and do them really well.

Let me give you the example of one of the shows I host: Singing The Blues. It’s a football podcast, all about the ridiculously average-to-poor team I follow, Sheffield Wednesday.

We focus our efforts on two platforms. Twitter, because there is a very active #swfc hashtag community, and it’s where a lot of fans go to discuss / moan about the team. And Facebook, where we have a page, but really we only post on it in order to then share into existing groups, some with over 20,000 members.

It doesn’t have a presence on LinkedIn because it’s just not appropriate.

Now consider another podcast I host, unLTD. This is a partnership project with unLTD magazine, which is a publication all about business in South Yorkshire. It’s been going for a few years now and is at the absolute heart of the business community in the county.

The only platform I push this on is LinkedIn. That’s where the audience is. I give it a plug or two on Twitter, but it doesn’t really get much traction there.

So why does this one work on LinkedIn? Put simply, it’s a podcast about subjects which are relevant to the platform and its members.

I also think you need to promote episodes slightly differently on LinkedIn, to how you might elsewhere. Its users are likely to be busy with a ton of content fighting for their attention. So sell what they’ll get from listening first and foremost. Be more direct.

The tools you use elsewhere are still useful. Things like nicely designed graphics and artwork work on LinkedIn. Audiograms, too. If you do a video version of your show, post it – that’s what I’ve done with the Content 360 video above.

To summerise, the lessons here are – think carefully about whether LinkedIn is the right platform to promote your podcast on; if it is, push them in the same way you would elsewhere, but really focus on the benefits a listener will get.

We’re talking about a platform where personal is king.

It might be more effectively to purely push your show through your own account, rather than setting up a separate ‘page’ for it. Business pages on LinkedIn are OK but they’ve never really captured the same sort of impact as individual’s profiles. As the old saying goes, people buy from people, so selling your podcast as yourself may well be more fruitful.

You’ll probably need to test things out to be sure, but I don’t see all that many podcasts with their own LinkedIn pages. That’s not to say they don’t exist, but I certainly don’t see them. Make of that what you will

Finally, the other thing to consider is a group. LinkedIn groups are a bit of an enigma. I’m in a few, but I never really have much idea what’s going on in them. They don’t send you (endless) notifications like Facebook and I don’t seem to get prompted to read any posts.

Groups are undoubtedly good for building a community. Right now, I’d be hard pushed to recommend starting a LinkedIn group over a Facebook group, but it’s something I’m continuing to try out and test, and I need to draw a few more conclusions before I can say with any certainty whether they’re worthwhile. Watch this space!

If you’re a bit stuck working out which social platforms are right for your podcast, don’t worry – you’re not alone. It’s hard working out where your audience is sometimes. Can we help? Book a free chat and let’s figure it out together.