‘Paid’​ premium podcasts – the good, the bad, and the unknown 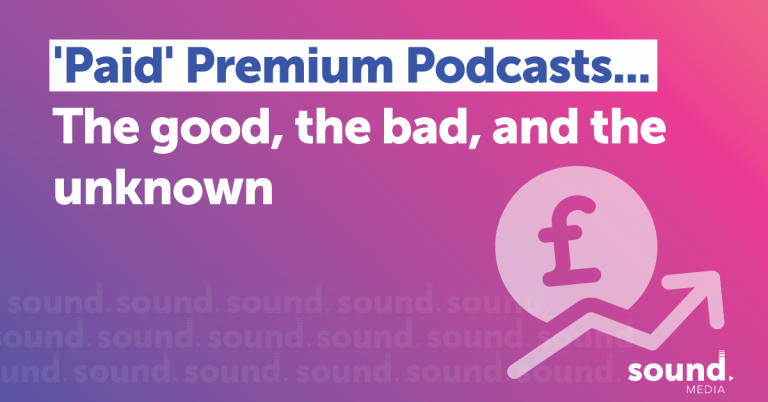 We’ve had quite a couple of weeks in the podcast world with both Apple and Spotify announcing their own takes on ‘premium’ podcasting. That is, essentially, a new way to charge people for your content.

It wasn’t a shock. We’ve known it has been coming for a while and if anything the surprise was how long it has taken to arrive.

While both have similarities in their approach, there are significant differences. And ultimately, what does it mean to us as podcasters?

In my view, both of them are really aiming for the big players. You can see from a mile off the kind of shows which would benefit from a ‘premium’ layer, and wouldn’t have any problems getting sign ups.

That isn’t to say that us more modest podcasters shouldn’t be looking at it. For independent podcasters, any way to monetise is welcome. Of course, we’ve always been able to do this through ads and sponsorship, and charging people for access to premium content isn’t new – it’s been possible through private RSS feeds for some time. However doing that isn’t as simple as someone tapping a button in an app they’re already familiar with. That’s what we get from Apple and Spotify moving into this space. The easier and more convenient it is for listeners to go premium, the more likely it is. Both of their approaches are, however, somewhat flawed.

They’ve had pelters in recent years for not really seeming to care about podcasts. They certainly haven’t done a whole lot with their Apple Podcasts app since it launched. To be fair, they don’t make big bucks off it in the way they do with app development and music, so why would they?

Taking that into account, it was inevitable that they would put something in place to get some of the money knocking around podcasting to flow through the Apple ecosystem.

Now let’s look at Spotify. They’ve been big on podcasting for a while now and have been happily investing in it. They bought the hosting platform Anchor, thus providing anyone with a way of getting their show out there for free. They’ve also really bumped up podcasts’ prominence in the app. I’ve long had the feeling that Spotify ‘care’ about podcasting and see the value in it.

There are loads more good and bad points for each. Those lists aren’t exhaustive, just the stuff that has stood out to me as I’ve been comparing.

I haven’t fully got my head around this bit, but you can actually offer premium subscriptions on both Apple and Spotify. It sounds like Apple has a clause for pricing parity, so you’d need to charge the same on both, but then I guess you would anyway. It’d likely mean uploading everything to each platform separately. Praise be for copy and paste.

They’d both work in a way whereby you’d most likely continue to publish your normal content, for free, in the way you do now. Then, the ‘premium’ option is for those listeners who want more. It could be stuff like additional content, extended versions of episodes, early access, ad-free versions, or any other ideas you might have.

The majority of my clients are podcasting for their business or personal brand, rather than it being a hobby or passion project. I’m not really expecting a huge rush of them to want to immediately jump on the premium bandwagon. Podcasting for your business isn’t designed to monetise directly through the content. You could call it a loss-leader. The idea is you still make money doing what your business does, and the podcast helps that.

At this point, I’m not planning on rushing out to clients insisting they go premium as soon as possible. It doesn’t make immediate sense in the scenario above.

I just don’t know whether there are any situations where the kinds of businesses I work with would want to charge for some of their content. This is the unknown – I’m looking forward to a few conversations over the coming weeks, to be honest.

We’re entering a new phase of podcasting. It’s exciting, but as ever there are hurdles, challenges and plenty of questions we still have to answer.

* For transparency – this is an affiliate link, but a genuine recommendation. It really is the platform I use, and I’ve tried a few!