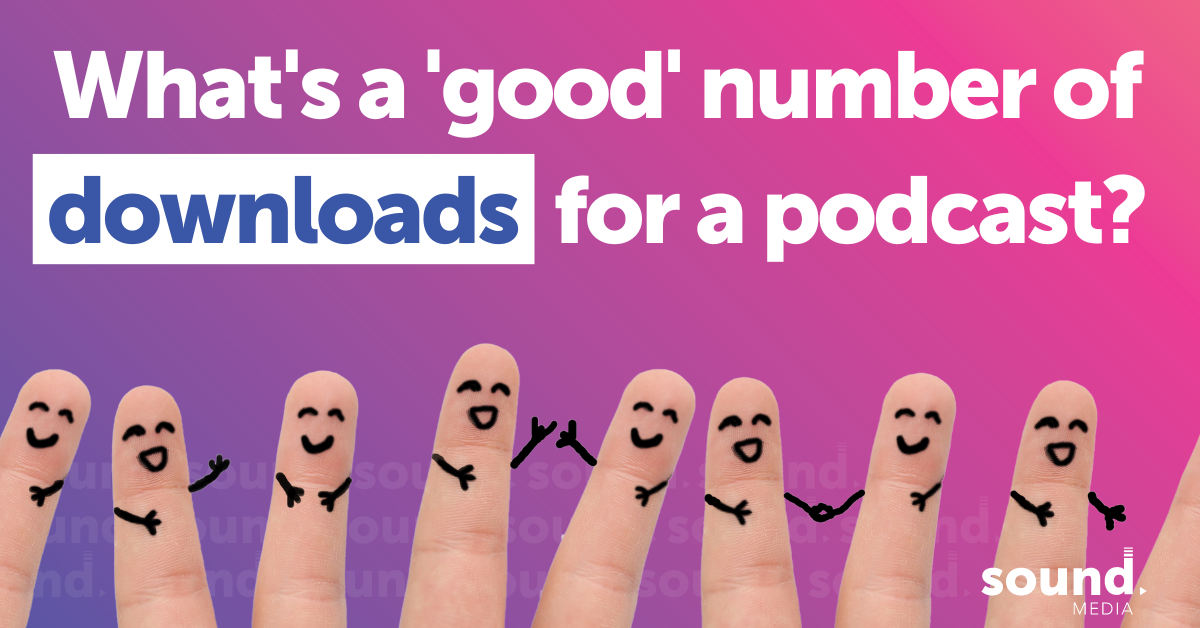 What’s a ‘good’ number of downloads for a podcast?

Posted at h in Uncategorized by
0 Likes

Some questions come up time and time again in podcasting, and one is some kind of variation on this – how many downloads is good?

It’s a perfectly understandable and fair question, especially for someone at the start of their podcasting journey.

The problem of course is there isn’t a magic number to answer with.

Worldwide, it’s predicted there will be 424 million podcast listeners by the end of 2022, so there’s a lot of people to go after.

But on the other hand, every podcast ultimately starts with an audience of zero, and with so much content out there vying for people’s attention, getting just a handful of listeners is going to appear daunting.

In truth, I’ve never yet come across a podcaster who’s not got a single listener. I’ve also known podcasts which get tens of thousands a week.

What’s the magic ‘good’ number for you really depends on a few factors, and a lot of mindset.

The more niched your podcast is – so the more specific subject area it covers – naturally means that the potential audience is smaller. However, the flip side of that is that there’s more of an opportunity to really engage with that audience.

The wider the subject base, the bigger the audience you have to go after, but the more likely that there is other content trying for those same people, and the risk that if someone else is making something that is a little more specific to what that listener wants, you might fade into the background.

None of this is really helping you come up with an actual number though is it?

This is where the mindset element comes in.

This is a scenario I often say to people to try to reframe the whole question of listenership. Let’s say that you hire a room at a local pub, to put on a talk on a given subject. It’s free for people to attend. Then it turns out that thousands of other people have also hired rooms at their local pubs to do talks on all kinds of other stuff on the same night.

What sort of turn out would you be happy with?

Would it be good if 10 people came? Or would you be disappointed with anything less than a couple of hundred?

I know it isn’t a particularly fair comparison because podcasting is virtual, rather than a physical event. Apply it to an online webinar instead – how many would you like to come along to that?

Next, let’s also consider that listeners aren’t just numbers. They’re real people, they all have names, and homes, and lives. Most will have jobs, lots will have families, and they’ll all have friends and social lives. They’re all being bombarded with content all day long.

It’s flattering when any person chooses to listen to our content.

This isn’t me saying you should aim low. But I do think there’s too much emphasis on pure numbers, and not enough on real people.

Taking all that into consideration, let’s go back to that primary question this blog is all about.

It’s fine to set a listener target when you start. You could base it on the existing audience you have on other platforms, like your social reach, or perhaps look closely at how niched your subject area is and work out a target from that.

But a much better way to tackle this is to concentrate on your strategy. Really focus in on why you’re doing the podcast, what you ultimately want to achieve from it.

Sound Media works with businesses and brands on podcasting and this stuff is especially significant here.

Having a clear strategy and overall aim for your podcast will probably present you with a much better metric to monitor than just sheer numbers.

So if you’re aiming to get more leads in, then you might use your podcast to push people to a landing page with a super-duper lead magnet.

You could even make it a podcast-specific page, so that you see clearly how many people are following your Call To Action.

Of course, it’s still interesting to know how many are listening, and if that figure is high but no-one is going to the link, then you’re probably getting your messaging wrong or attracting the wrong audience.

At the end of the day, evaluating the success of YOUR podcast is an equation only you can balance – what factors to take into consideration, how important numbers are versus engagement, etc.

Sound Media works on this stuff with new clients right at the start – so they have clarity on the metrics to measure and how we’ll judge their success.

Get in touch if you’d like to find out more about the work we do with businesses and brands.